skip to main | skip to sidebar

Introducing my Father-in-law & my Wife. They're "models" in Personal Money magazine October 2005 Issue

Yes, my father-in-law and my wife were in the front cover of Personal Money magazine. That time, she was my girl friend, and her father, well.... let's just say that I used to live in their house most of the time. 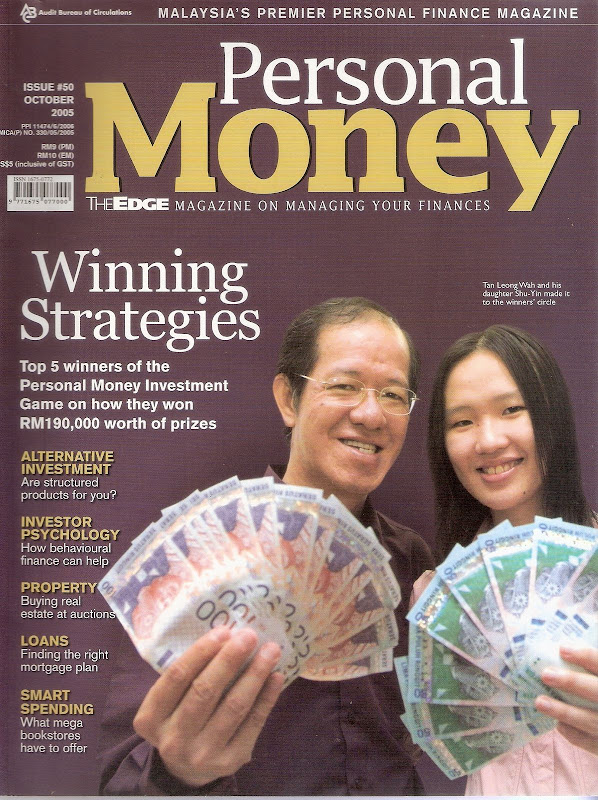 Isn't she pretty? She's getting prettier day by day. Take a look at her blog here.

Why are they in the front cover of Personal Money magazine holding money?. Well, they joined the Investment Game organised by the magazine (sponsored by Hwang DBS) together with me.

The contest lasted for 1 year, and the winner was decided based on the investor's return after deduction of all charges and transaction fees. My father-in-law was the Champion, and my wife was 4th. How about me? I got 6th position. 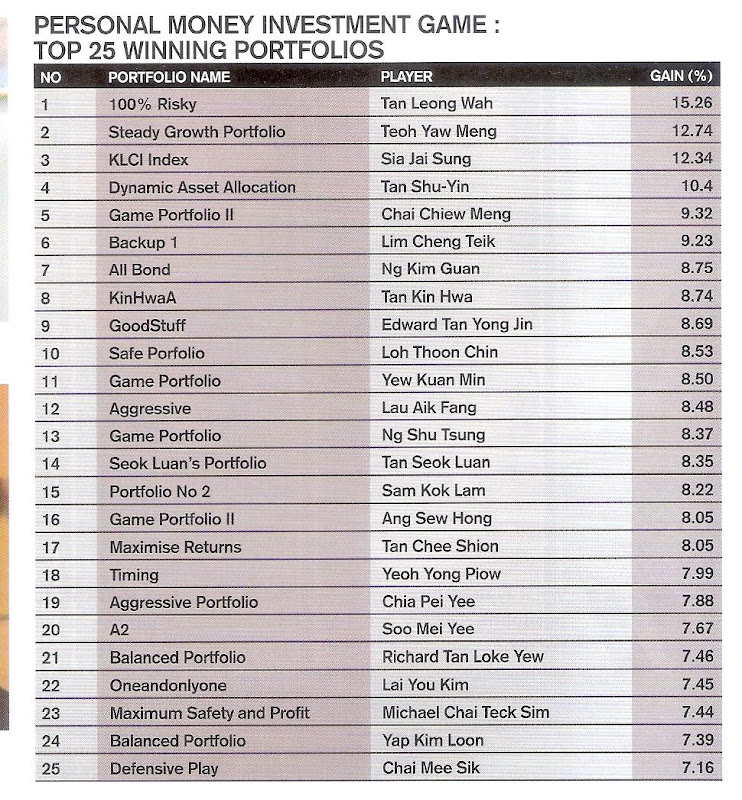 Special mention: The No. 14 winner, Tan Seok Luan is my good friend, and my 1st agent who joined me in Public Mutual. I informed her about the contest, and suggested her to join as soon as possible, and invest in a low cost Bond Fund with good past performance.
She took my advice, and she kept the winnings. :-)
A few things the 3 portfolios (my Father-in-law, my wife and mine) had in common:
1) We all lived in the same house at that time.
2) We used the same computer.
3) We ate dinner together most of the time... hehehe..
4) All the 3 portfolios were being "advised" by the same person. :-)

They interviewed the top 5 winners, and each has their own page story. I missed the Top 5 mark by 0.09%. 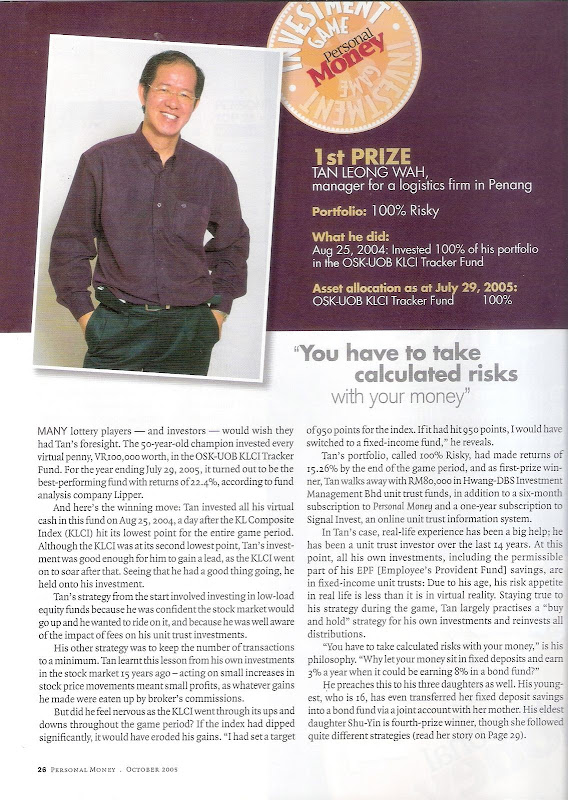 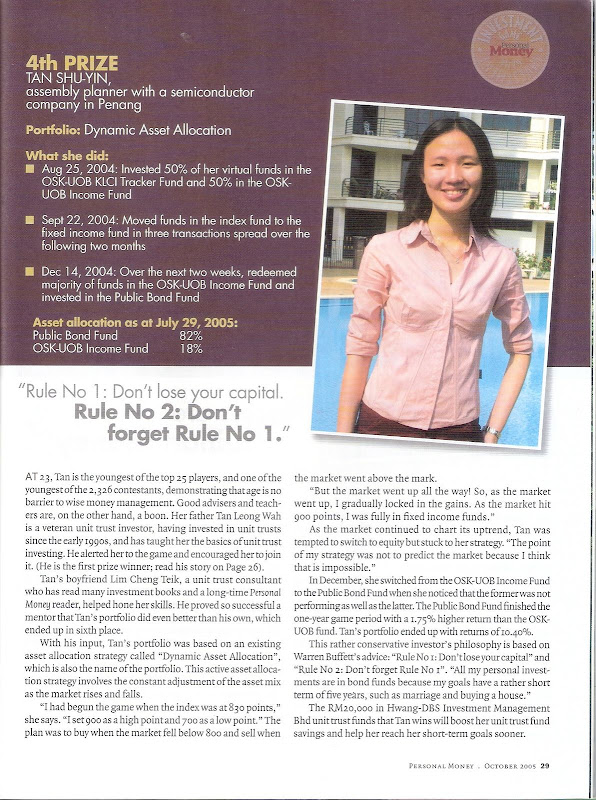 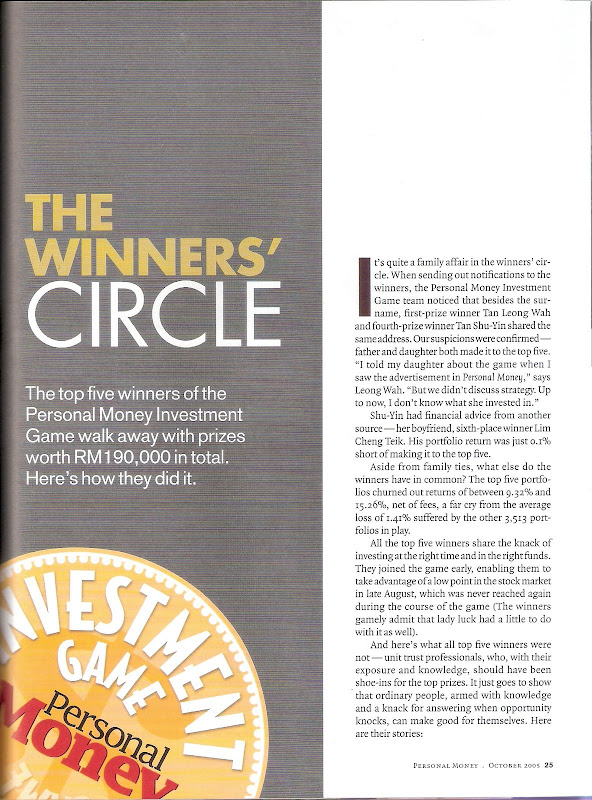 The Winner's Circle. My name was mentioned, though i wasn't "promoted" as husband, yet.

What's interesting, is this small side article: 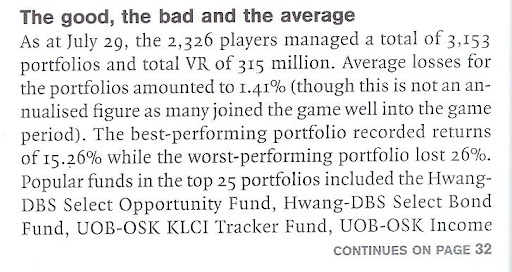 I know i did not take this contest for fun as there is real money at stake! Infact, all my money (then, now, and future) are serious money. I think carefully before I put my money anywhere. I always compare what I pay with what I get.

Being frugal is totally a different meaning compared to being a miser.

In one my future entries, maybe I would explain more about the 4th position portfolio 'Dynamic Asset Allocation' which I believe is supposed to shine out among the 3 portfolios. 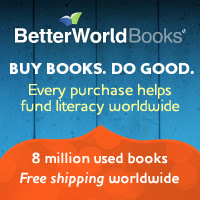